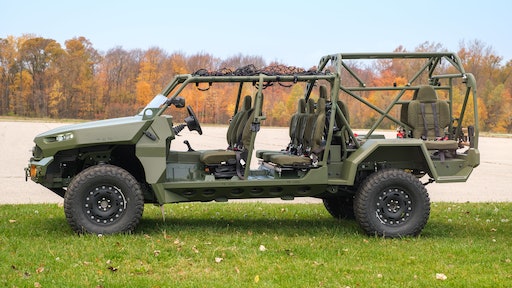 GM Defense LL, which is a subsidiary of General Motors (GM), recently made its first delivery of the company's Infantry Squad Vehicle (ISV) to the U.S. Army. The ISV is a light and agile all-terrain troop carrier designed to transport up to nine infantry personnel and their equipment. This is the first major award and delivery for GM Defense since it was re-established in 2017.?

The vehicles were delivered as part of a $214.3 million contract awarded to GM Defense by the U.S. Army in June. GM Defense will manufacture a total of 649 ISVs as part of the contract, as well as support production of up to 2,065 vehicles with additional authorization over 8 years.?

"One hundred and twenty days from contract award to delivery is a significant milestone, and I am very proud of the team for this accomplishment," said David Albritton, President of GM Defense, in the press release announcing the delivery of the ISVs. "We’re leveraging General Motors’ engineering prowess and immense manufacturing capabilities to bring transformative solutions to the military vehicle market. Our initial success with the ISV shows our commitment to our customer and highlights our unique right to win in the military mobility market."

Developing the right design for the mission

The ISV is based on the design of GM's Chevrolet Colorado ZR2 truck architecture. Ninety percent of the components used are proven, commercial-off-the-shelf (COTS) parts which helps ensure their reliability. Weighing 5,000 lbs. (2,268 kg), GM Defense says the ISV was specifically engineered to meet military requirements and provide rapid ground mobility. Doing so ensures the safety of military personnel in the various environments in which they may be operating.?

GM Defense says the vehicle is light enough to be sling loaded from a UH-60 Blackhawk helicopter and to fit inside a CH-47 Chinook helicopter, making air transport from one destination to another easier for the U.S. Army.?

A rollover protection system (ROPS) on the ISV further helps to ensure the safety of military troops by keeping them securely in the vehicle should there be a rollover incident. In addition, the use of COTS parts makes it easy to get spare parts if necessary and minimize downtime which is especially critical for military personnel who are often working in dangerous locations.?

"During Soldier testing, the feedback we received was paramount in delivering a vehicle that met Soldiers’ needs, while maximizing safety and performance and taking their comfort into consideration," said?Mark Dickens, GM Defense Chief Engineer, in the press release announcing delivery of the ISV. "The production ISV we’re delivering today is an evolution from our original prototype design, and it’s certainly a vehicle that is a source of pride for the team."

"The ISV will showcase the speed at which the Army can rapidly produce, field, and sustain new equipment by leveraging a proven commercially available vehicle and the global supply chain infrastructure of General Motors, supported by Ricardo," said?Chet Gryczan, President of Ricardo Defense, in Ricardo's press release announcing the partnership with GM Defense.?

"Ultimately, our combined goal is to provide the best-in-class product and sustainability to help ensure our warfighters have confidence with the ISV throughout its lifecycle on and off the battlefield," said Albritton.??

According to GM Defense, the ISV will provide the U.S. Army with manufacturing efficiencies, ease of maintenance and a well-established global supply chain.?

The company is expanding its portfolio of Digital Displacement pumps with new variants to meet the requirements of more machine applications.
Sara Jensen
November 5, 2020

Data continues to be an integral component on the path toward further autonomy and connectivity.
Sara Jensen
October 5, 2020
Latest

The Grove GMK4060HC are specially designed for military use and a variety of terrains.
The Manitowoc Company, Inc.
September 16, 2020

The X200-4A provides vehicle propulsion, integrated differential steering and brakes, and has been utilized in the M113A3 armored personnel carrier since 1986.
Allison Transmission
July 10, 2020

JCB will supply up to 400 High Mobility Engineer Excavators which will all be manufactured at its North American headquarters.
JCB North America
July 9, 2020

The order is valued at $127 million and includes vehicles for the U.S. Army, U.S. Marine Corps and the Department of State.
Oshkosh Corporation
July 1, 2020

Ricardo will lead the Integrated Product Support portions of the contract, as well as assist in technical areas including safety, reliability and cybersecurity.
Ricardo plc
June 30, 2020

The headquarters is now located at the Mack Customer Center, providing the company with more working space and access to features such as a test track.
Mack Trucks Inc.
June 26, 2020

Hutchinson will provide complete wheel assemblies, beadlocks and thermal hub covers for the M917A3 which will be utilized by the U.S. Army.
Mack Trucks Inc.
June 2, 2020

The contract enables fleet managers in more than 300 federal agencies to have a one-stop shop where they can select commercial Mack vehicles and parts to address their needs.
Mack Trucks Inc.
April 22, 2020

Allison will provide its X200 transmissions for use in the U.S. Army's M113 Armored Personnel Carrier family of vehicles.
Allison Transmission
December 5, 2019

The Army selected the Grove GMK4060HC cranes for their high capacity, strong load chart at long radii and the long reach of the MEGAFORM boom.
The Manitowoc Company, Inc.
October 24, 2019

Meritor's 3400 eISAS electric independent suspension is designed for use in tactical and combat vehicles.
Meritor, Inc.
September 13, 2019
Follow Us
真钱牛牛